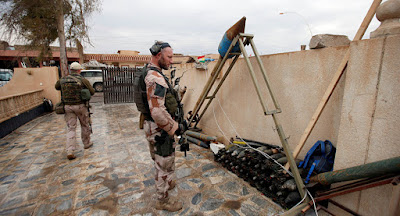 The US-led coalition may look into establishing temporary bases in Iraq to finish the campaign against Daesh after the liberation of Mosul, Operation Inherent Resolve Commander Lt. Gen. Stephen Townsend said in a briefing on Tuesday.

The commander noted that he anticipated the coalition’s future footprint will be smaller, and added that he is not anticipating needing more bases for post-Daesh period.

The US-led coalition is already training the Iraqi military to prepare for the evolving threat the remaining militants may pose after the group is defeated, Townsend said.

"We do know that our Iraqi Security Force partners will have to engage in counter-insurgency style operations at some point, and we’re already making efforts now to start shaping their training towards that next ISIS tactic."
Townsend said fighters surviving the overall offensive may adopt insurgent-style tactics that will still pose a threat to Iraq’s security.

Instead of a conventional force threat, "they’ll be smaller, more covert," he added.

Townsend pointed out US or coalition troops are unlikely to be significantly involved in wider stabilization efforts in Iraq, adding that the Iraqi government is capable of undertaking such projects assisted by the United Nations.

Some of Daesh militants remaining in Mosul offered to negotiate a surrender as the city fell to the Iraqi military and US-led coalition, Townsend added.

"This afternoon there were some ISIS offers to negotiate a surrender," Townsend told reporters of the move by the terror group. "I was pleased to hear that the Iraqi commander’s response was…‘unconditional surrender’."

Townsend said the Iraqis refused to negotiate and told the terrorists to surrender unconditionally or be killed.

A Daesh commander had offered on Monday to surrender a group of fighters but refused the Iraqis’ order to surrender unconditionally, Townsend explained.

A later wave of suicide attacks led the coalition to assess the surrender offer was a ploy by the militants to get close to the Iraqi Security Forces.

The Tuesday offer was reported to be a serious one, Townsend pointed out.